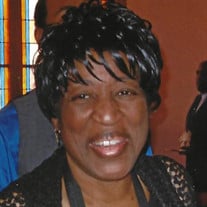 Earnestine Washington Lambert, 72, of Syracuse, NY departed this life peacefully on Tuesday, April 27, 2021. Earnestine was born in Bishopville, SC and raised in Fulton, NY by her late parents Clifton and Lula Mae Washington. She moved to Syracuse after graduating from G. Ray Bodley High School in 1966. She attended Onondaga Community College and Syracuse University where she earned a bachelor’s degree in Human Services. Earnestine was a dedicated employee of General Electric until her retirement in 1985. She also supported patients of Home Inc. for 10 years as a family home care provider. Earnestine was preceded in death by her loving parents, Clifton and Lula Mae Washington; her daughter, Bronwyn Lynese Lambert and brother, William “Billy” Washington. Earnestine leaves her loving family to mourn her passing, her daughter, Terrice (Daniel) Ingersoll, grandson, D’Artist (Chassidy) Vaughn; granddaughters, Etienne Vaughn and Nova Lynese Willis-Robinson; great-grandson, Jaycienne Vaughn; sisters, Mary Washington and Betty (Elliott) Rouse; brothers, Clifford (Irma Jean) Sanders, James (Delores) Sanders, Marion Sanders, and Harry Washington; as well as a host of nieces and nephews. Earnestine had many hobbies, which included spending time with her family, gardening, shopping, watching some of her favorite television series, taking trips to the casino, interior design and cooking. All visitors to her home could see her passion for interior design and Asian art as she was a fanatic collector of Asian antiques. Earnestine’s culinary skills were superb! She was an avid home chef who loved to cook and bake. She was known for cooking large family style meals that were loved by everyone. Earnestine will be truly missed by all those that loved and knew her.

The family of Earnestine Lambert created this Life Tributes page to make it easy to share your memories.

Send flowers to the Lambert family.