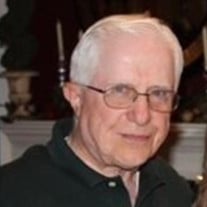 Emmanuel “Mike” J. Calocerinos, 90, of Jamesville, passed away peacefully on Monday. He was born in Utica, NY on November 28, 1931 and resided in the Syracuse area for most of his life. In 1953 Mike graduated from Rensselear Polytechnic Institute with a degree in Civil Engineering. After graduation, he was drafted in the U.S. Army from 1954-1956 serving in Japan and Thailand. Mike started his engineering career in Phoenix, AZ working for the Arizona State Health Department. He went on to work at MC Yoder Engineering in Berkeley, California before settling in Syracuse to work for O’Brien & Gere Engineers from 1959 to 1967. In May 1967, Mike founded Calocerinos Engineering. Then in January 1968, along with Frank Spina, he and Frank founded Calocerinos & Spina Engineers (now C&S Companies) and retired in 2002. Mike was an avid golfer who enjoyed playing golf until he was 86 years old. One of his greatest joys was playing golf with his grandchildren and watching them excel. He was a long time member of Lakeshore Yacht & Country Club and a communicant of St. Sophia’s Greek Orthodox Church. Mike enjoyed his retirement spending winters in Palm Beach, Florida where he was a member of Bear Lakes and Mirasol Country Clubs. He was predeceased by his parents, James and Vasso (Cassimatis) Calocerinos. Survivors include his loving wife of 58 years, Diane (Panarites) Calocerinos of Jamesville; daughter, Vickie (Anthony) Millimaci of Fayetteville; sons, James Calocerinos of Syracuse and Steven (Maria) Calocerinos of Cicero; sisters, Joanne Calocerinos of Fort White, FL, Olga Bead of Kissimmee, FL, and Elizabeth Franz of Jamesville; brother, Theodore Calocerinos of Utica; grandchildren, Anthony Millimaci, Alexandra Millimaci, Michael Millimaci, Jayce Calocerinos, and Sofia Calocerinos; mother-in-law, Maria Panarites; brothers-in-law, Nick Panarites and Yiorgos Panarites; several nieces and nephew. The family would like to thank Mike’s caregivers for the kind and compassionate care provided to him over the past two years. Funeral services will be private. In lieu of flowers, contributions may be made to St. Sophia’s Greek Orthodox Church or the Parkinson's Foundation, 200 SE 1st Street, Suite 800, Miami, FL 33131.

Emmanuel &#8220;Mike&#8221; J. Calocerinos, 90, of Jamesville, passed away peacefully on Monday. He was born in Utica, NY on November 28, 1931 and resided in the Syracuse area for most of his life. In 1953 Mike graduated from Rensselear Polytechnic... View Obituary & Service Information

The family of Emmanuel "Mike" Calocerinos created this Life Tributes page to make it easy to share your memories.

Send flowers to the Calocerinos family.