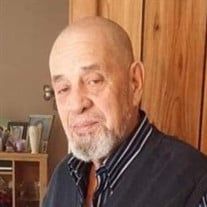 Feliciano DeJesus, known affectionately to many as Felix, was born on January 24, 1950, in Santa Isabel, Puerto Rico. Feliciano was the oldest child born through the marriage of Antonio DeJesus and Carmen Maria Lopez. Feliciano was a loving brother to his 12 siblings, Jose, Petronila, Miguel, Edwin, Carmen, Nidia, Maria, Robustiano, Felix, Luis, Luz, and Aracelis. Early in his life, Feliciano was dedicated to hard work, adventure and creating a great life for himself. Wanting to explore and searching for adventure, Feliciano, always being independent, moved to Miami, FL at age 14. In Miami, Feliciano developed his love of boxing and battled in the ring as a boxer until he moved to New York City at the age of 17 ready for the next adventure. It was in New York City that he married his first wife Eva Avery and became father to her children Nadirah and Anthony. The union of Feliciano and Eva produced Sonia and Feliciano Jr (Papi). Feliciano also fathered a son Jose with Ruth Williams. Later he met Jeanne Chester, the love of his life who would later become his wife and mother to his youngest children Adrian (Eggy) and Jeanne (Soly). Feliciano and Jeanne enjoyed a union of more than 40 years and together they raised five children Monique, Deedria, Dishoun, Eggy & Soly. Feliciano was a dedicated father who loved to provide for his children. In addition to his family life, Feliciano had a knack for fixing and building things. As he had done so many times before, he used his talent to create opportunities for himself and turned his love of building and repairing to becoming a carpenter. Wanting to move away from the hustle and bustle of New York City, Feliciano and Jeanne moved to Montgomery, Alabama in 1992. There, he worked at Greyhound and was a beloved member of the team. He was a hard-worker and had a strong work ethic. At work he was known to be reliable and dependable. Feliciano retired from Greyhound after 15 years. His retirement capped a nearly 40-year career of hard work and service in which he hardly ever took a day off. Ready for the next phase of his life during retirement, Feliciano moved to Syracuse with Jeanne in 2009. Retirement brought new interests for Feliciano. He continued his love of carpentry and used his skills to build things around the house. He was so proud of the patio table and benches he built for family and friends to gather around in the backyard of their home. Feliciano, always a great cook, picked up a new hobby in retirement, gardening. He loved his home garden and cultivated peppers, tomatoes, string beans, Brussels sprouts, cilantro, and collard greens. He had a green thumb and enjoyed planting flowers and cutting the grass at the house. For him, this wasn’t just about a hobby, it was also another way of making sure his family was taken care of. It was important that food, fun, and opportunities to gather and celebrate were a regular part of Feliciano’s family life in Syracuse. While building things, working hard, and providing for his family were core to who Feliciano was, he was also full of fun. He loved to tell jokes, have fun and laugh. Whether playing cards with family, watching his beloved Yankees, enjoying seafood, or enjoying boxing, he always had a hearty laugh. Feliciano could whip up a meal as quick as he could whip up a laugh. He taught his family the joy of Puerto Rican food and would always try to feed everyone who came over. We will forever remember our beloved Feliciano as a provider, a father, a friend, and a man dedicated to his family. He always made sure his home was a place of joy, laughter and food for all who needed love, sanctuary and rest. Feliciano is survived by his wife Jeanne; children Nadirah, Anthony, Sonia(Ashby), Feliciano Jr. (Papi), Jose, Monique, Deedria, Shoun, Adrian, Jeanne(Soly) and son in law Andre Ashby; sisters Petronila, Carmen, Nidia, Maria, Luz, Aracelis; brothers Miguel, Edwin, Robustiano, Felix, Luis; 26 grandchildren, 12 great-grandchildren and a whole host of nieces, nephews and cousins.

Feliciano DeJesus, known affectionately to many as Felix, was born on January 24, 1950, in Santa Isabel, Puerto Rico. Feliciano was the oldest child born through the marriage of Antonio DeJesus and Carmen Maria Lopez. Feliciano was a loving... View Obituary & Service Information

The family of Feliciano Lopez DeJesus created this Life Tributes page to make it easy to share your memories.

Feliciano DeJesus, known affectionately to many as Felix, was...

Send flowers to the DeJesus family.