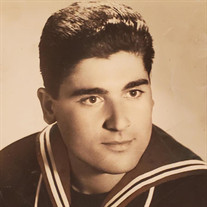 It is with great sadness that we announce the passing of Francesco Canzano of North Syracuse, New York on January 8, 2021. Born in Calvi Risorta, Italy on June 17, 1937 to Giovanni and Petronilla Canzano, he is survived by his wife Maria (Capuano) Canzano, his children Petronilla Canzano, of North Syracuse; Teresa (Vito) Barletta of North Syracuse; Francesco Antonio (Emanouela) Canzano of North Syracuse and Romolo (Jodie) Canzano of Liverpool; his brother Agostino (Linda) Canzano of Syracuse, New York; his sisters Anna Polizzi of Middleburg Heights; Ohio, Gemma Parrotta of Mississauga, Ontario, Canada and Rosalba (Gino) Ferraro of Las Vegas, Nevada, as well as eleven grandchildren, two great-grandchildren and numerous family throughout the United States, Canada and Italy. He was predeceased by his parents, his sisters Antonietta Bovenzi and Teresa Zona as well as his brothers-in-law Antimo Bovenzi, Vito Zona, Eduardo Polizzi and Donato Parrotta. Born in Italy just before World War II, he recalled active conflict and being separated from his family during the German retreat. After the war, as a teenager, he was an amateur cyclist, winning many regional cycling medals in track cycling, training in the hills and mountains of southern Italy. Thereafter, in 1957, he entered the Italian Navy becoming a member of the elite, “Incursori”, the Navy special forces unit and was a frogman specializing in underwater demolitions. He continued with sport while in the military, becoming a member of the Navy crew team, also receiving many accolades. In November 1965, following his parents and bringing his brother and sisters, he immigrated to the United States, briefly living in Rochester and settling in Syracuse, New York. He was followed by his childhood love, Maria, who immigrated in May 1966. They were married on June 18, 1966 and honeymooned for one night in Niagara Falls, New York, borrowing his brother Agostino’s car for the trip. For the next two decades, he worked for the Syracuse Mosaic and Tile Company in Syracuse, New York where he was known as the “Double-man” as labeled by the owner, Louie Moro because he did the work of two men. He specialized in laying and grinding terrazzo floors, working with marble and laying tile, and often travelled throughout New York state for jobs. While working for the tile company and after leaving the company, he and Maria bought, remodeled, rented and sold numerous properties throughout the city of Syracuse, working evenings, weekends and holidays on the properties. As a team, Maria managed the real estate, purchases, sales and renting, while Francesco managed the construction, renovation and remodeling. Together, they amassed numerous properties throughout the city. His real estate and construction career and life culminated in the construction of “La Casa Italiana” in 1996, his large stone house in North Syracuse. Each part of the home was custom designed and crafted, including pouring and grinding terrazzo and marble floors, casting and hanging plaster reliefs and cornices as well as dome and vaulted ceilings. The crowns of the home are the two-story marble and terrazzo fire place and a circular terrazzo and marble center stairwell. He never stopped adding to or changing the home as it is surrounded by gardens, statues and fountains. He took great delight in helping in the construction and renovation of his children’s projects, selflessly helping each of them renovate or build their own homes. He enjoyed casting and painting statues, carving marble and designing, pouring and grinding terrazzo tables, floors and wall plaques. He was the beloved leader and patriarch of his and the extended family. “You don’t have to go fast, just don’t stop and hurry up.”

It is with great sadness that we announce the passing of Francesco Canzano of North Syracuse, New York on January 8, 2021. Born in Calvi Risorta, Italy on June 17, 1937 to Giovanni and Petronilla Canzano, he is survived by his wife Maria (Capuano)... View Obituary & Service Information

It is with great sadness that we announce the passing of Francesco...

Send flowers to the Canzano family.