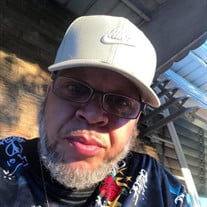 George Edward Apgar born July 8, 1969, passed away peacefully on February 25, 2022, in Syracuse NY. A Syracuse native, George lived in Texas and most recently Buffalo, New York. After graduating from Nottingham High School, George received his barber license. He gave back to the community by giving haircuts to the youth and the less fortunate. George was a down to earth guy who loved his family and friends. When he wasn’t cutting hair, he worked at H-E-B Sale and Marketing, in Texas. Currently he was cutting hair at Robins Barber Shop in Buffalo. Throughout his life George was extremely loved by his community. He was known as the “315 Syracuse Legend”. A few of his passions were listening to music and creating memories with his loved ones. He will be missed but remembered with so much love. He was predeceased by his father, Samuel Rogers. He leaves to cherish his memory, his mother, Janet Powell; God-mother, Jacqueline James of Palm Coast Florida; wife, Stephenie Newport-Apgar of TX and step-daughter, Meghin of Houston, TX; his significant other, Amy George and step- daughters Mariah and Melanie all of Buffalo, NY; son, Gizmo; aunt, Mary Jane; siblings, April Apgar and her six children and nine grandchildren, JoTina Albert and her four children and five grandchildren, Tracey Smith and her six children and seven grandchildren, and Emic Smith and his two children and five grandchildren all of Syracuse, NY and Eric Smith and his nine children of Florida; and a host of loving family and friends.

Send flowers to the Apgar family.