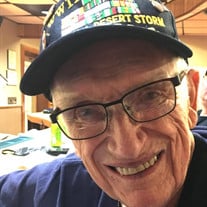 Harold P. Slate, 96, of North Syracuse, passed away peacefully at home surrounded by his loving wife and family. Harold was born in Alexandria Bay, NY and was a loving husband, incredible father and grandfather, and a true American patriot. Harold is predeceased by his parents, Reuben and Lauretta; his brother, Robert Slate who was killed in action in 1944 on D-Day; his sister, Agnes Thibault; and his brother, Francis Slate. He served in the United States military and was a VETERAN of World War II, Korean War, Vietnam War, and Desert Shield/Desert Storm. He joined the US Navy in 1943 at the age of 17 and was soon put on a ship for Algiers, Africa, Augusta, Sicily, Naples, Italy, Anzio, Italy, North Africa, Belfast, Ireland, Murmansk, Russia, Scotland, and Sherburn, France. He left the US Navy in 1946 and enlisted in the US Army in 1948 where he became a Combat Photographer and served in the US Army Signal Corps, working at the Signal Corps Photo Center, US Army Pictorial Center, and Old Paramount Studios, and was then shipped out to serve in Japan for the Pacific Stars and Stripes, 8th Army, 16th Signal Photo Company, and the 44th Military Police, Criminal Investigation Detachment. He left Japan in 1951 and was assigned to the 403rd Military Company in Syracuse, NY and then was assigned to the 56th Military Police Detachment at Ft. Gordon, GA. In 1955 he was sent back to Tokyo, Japan, Pacific Stars and Stripes as a Photographer, during his time he performed temporary duty at US Army Forces Headquarters, Taiwan, still and motion picture coverage in Quemoy under heavy artillery bombardment. In 1964 he returned to the United States and served in the Army Pictorial Center in Long Island City, NY and in 1965 he was sent to Saigon, Vietnam for the Department of the Army Special Photographic Office (DASPO). He came back to the Army Pictorial Center in Long Island City, NY in 1966 and retired from the US Army. In 1991 he volunteered and was called to active duty at Ft Meade, MD and was assigned to the US Army Escort Detachment in support of Operation Desert Storm. After retiring from the US Army, Harold worked for Carrier Air Conditioning as an Industrial Photographer and retired in 1986. He also worked part-time at The Syracuse Newspapers as a photojournalist for 35 years. Harold met his beautiful and loving wife, Teruyo in Tokyo, Japan and married her on February 24, 1959. Harold and Teruyo have been happily married for 63 years. Survivors include his wife, Teruyo; children, Barbara (John) Bitetti, Deborah (Dr. William) Schu, Linda Slate, James (Kathleen) Slate, and Steven (Qi) Slate; grandchildren: Rebekah, Dr. William, Miya, John, Alexia, Noah, and Wyatt. Harold loved life, loved his wife, children, and grandchildren, and loved serving this great country of ours. He loved spending time with his family and was passionate about his time in the military, taking pictures, traveling throughout Japan, fishing, camping, skiing, snowmobiling, bowling, and enjoying the company of friends and people he would meet. All who knew him, loved him. He was the life of the party and became friends with anyone he met and left an impression on everyone. He loved taking pictures and printing them and making photo journals for everyone. He was a generous, courageous, and honorable man who led with his heart and gave to others. He was a member of the Knights of Columbus and was a previous Grand Knight. He was a member of the American Legion for 75 years, American Legion Forty and Eighth (Society of Forty Men and Eight Horses), Veterans of Foreign Wars (VFW), Pacific Stars and Stripes, and the International Press Club. Calling hours will be held on Wednesday, March 9th, from 4 p.m. to 6 p.m. at FARONE & SON Inc Funeral Home, 4899 W. Taft Road, Liverpool. Funeral services will be Thursday, March 10th at 10 a.m. at St. Rose of Lima Church, 407 South Main Street North Syracuse, where a Mass of Christian Burial will be celebrated. Burial will be in Arlington National Cemetery. In lieu of flowers, contributions may be made to St Rose of Lima Church, 407 South Main Street North Syracuse, NY 13212.

Harold P. Slate, 96, of North Syracuse, passed away peacefully at home surrounded by his loving wife and family. Harold was born in Alexandria Bay, NY and was a loving husband, incredible father and grandfather, and a true American patriot.... View Obituary & Service Information

The family of Harold P. Slate created this Life Tributes page to make it easy to share your memories.

Send flowers to the Slate family.