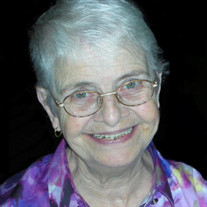 Freed at last of her mortal coil, Harolyn Hilton Boyle of Pulaski, who passed away January 6th, having long and fearlessly weathered multiple prolonged illnesses. She lived in ten decades, two centuries, and two millennia. Harolyn was the youngest child of Brainard George Hilton and Ada Belle Hilton (neé Greenfield). On September 19th, 1937, she was born in the very house her father built, on the Hilton family’s dairy farm, Old Mexico Rd (today Co Rt 41) in the Town of Richland. Harolyn attended Pulaski School, graduating in 1956, after which she studied in Syracuse to be a seamstress. Through penpals she befriended a family located in Hinman Hollow near Cooperstown, Otsego County. While visiting there one summer she met her soon-to-be husband, Barrie McKennan Boyle of Ossining, Westchester County. Barrie moved up to Pulaski to work and live for a time with the Hilton family and, after a courtship, Harolyn and Barrie were wed in the Pulaski Methodist Church in January 1959. They then settled in Cooperstown where they both found work at Bassett Hospital. Harolyn and Barrie had two children, John Morell, born August 1963 and Ellen McKennan, born April 1965. Amicably divorced in 1971, Harolyn returned with John and Ellen to Pulaski, where she raised them and made a living from her house as a seamstress for decades. She’s preceded in death by her parents; brother, Don; and sister, Faye; her children’s father, Barrie; and her daughter, Ellen. Harolyn leaves a lifelong example of true grit to, particularly among us, her sister Phyllis; her son John and his wife Kathryn; her grandchildren Sam, Andrew, Cooper & Ace; her great-grandson Bill; as well as many dear nieces, nephews and friends. Harolyn’s life was complicated by a skeletal disease which went misdiagnosed from childhood well into her late 40’s. In 1985, by the assistance of a grant from the Little People of America, she was referred and admitted to Johns Hopkins Hospital where she was finally diagnosed and properly treated for Hypophosphatemia. She credited this good turn with greatly relieving her of chronic pain and giving her another 20 or 30 years. Therefore, Harolyn’s family asks that in lieu of flowers, donations be made in her memory to the Little People of America; or to the United Friends of Homeless Animals in Richland if supporting a local cause is preferable. Memorial services are not yet planned due to the distances involved and consideration to the ensuing pandemic. Her remains will be placed near to those of her daughter Ellen in Hinman Hollow.

Freed at last of her mortal coil, Harolyn Hilton Boyle of Pulaski, who passed away January 6th, having long and fearlessly weathered multiple prolonged illnesses. She lived in ten decades, two centuries, and two millennia. Harolyn was the youngest... View Obituary & Service Information

The family of Harolyn Boyle created this Life Tributes page to make it easy to share your memories.

Freed at last of her mortal coil, Harolyn Hilton Boyle of Pulaski,...

Send flowers to the Boyle family.