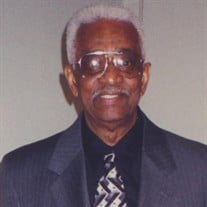 Henry W. Vaughn, Jr., 87, of Syracuse, went home with the Lord on Tuesday, October 20th at Crouse Hospital surrounded by his family. He retired from the City of Syracuse D.P.W. as a Deputy Commissioner where he worked for over 40 years. Henry... View Obituary & Service Information

The family of Henry W. Vaughn, Jr. created this Life Tributes page to make it easy to share your memories.