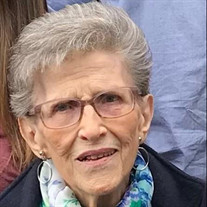 Hilda (Marnell) Loguidice, 94, of Syracuse, passed away peacefully on June 18th. Born to Michael and Florence Marnell, Hilda was a lifelong resident of Syracuse. At the age of 15 Hilda met the love of her life Frank Loguidice while attending Central Tech High school. After graduating from High School at the age of 16 she worked multiple jobs to put herself through college at Syracuse University where she graduated with a degree in Bacteriology. After spending many years at home raising her family, she made the decision to return to work and spent the next 24 years working for the Syracuse University Student Health Center before eventually retiring as the Laboratory supervisor in 1986. Hilda was a kind, caring, and generous women who loved her family “way up in the sky, and to the moon and back”. She told each of her children, grandchildren and great-grandchildren that she loved them the most, never divulging her true favorite. When told “I love you” by anyone she always responded “I love you more”. Hilda enjoyed playing cards and hosting dinner parties with friends, and watching the game show network, and The Nanny, but her biggest passion was the casino. Hilda and Frank took many trips to Las Vegas and Atlantic City as well as frequenting the Turning Stone Casino. She and Frank took annual trips around the country. Her most memorable was to San Francisco where she was caught in the 1989 Loma Prieta Earthquake, she vowed never to return to California, and she kept that vow. Hilda was a devout catholic and a communicant of Holy Cross Church in DeWitt. She was preceded in death by her loving husband of 70 years, Frank Loguidice in 2019; her son-in law, James McHerron in 2001; grandson, Christopher Todd in 2011; and her three sisters, Clementine DeFrancisco, Gloria Danello, and Dolores Spina. She is survived by her children, Linda McHerron, Michael (Wendy) Loguidice, and Marybeth (Dare) Dutter; grandchildren, Jerime (Rebecca) McHerron, Karen Loguidice, Michael Loguidice, Michelle Loguidice, Brendan Dutter, Sarah Dutter, Erica (Brad) Trimm, Joe (Renae) Wright and Chelby Blackledge; and 11 great-grandchildren. She is also survived by her sister-in law, Barbara Detran; several nieces, nephews and cousins. The Family would like to thank the staff at The Nottingham for the loving care they gave our mom. Calling hours will be held on Sunday, June 27th, from 2-4 p.m. at FARONE & SON Inc Funeral Home, 4899 W. Taft Road, Liverpool. Funeral services will be held on Monday, June 28th, 11 a.m. at the funeral home at 4899 W. Taft Road, and 12 p.m. at Holy Cross Church, Dewitt, where a Mass of Christian Burial will be celebrated. Entombment will follow in St. Mary’s Cemetery Mausoleum. Contributions may be made to a charity of one’s choice.

Hilda (Marnell) Loguidice, 94, of Syracuse, passed away peacefully on June 18th. Born to Michael and Florence Marnell, Hilda was a lifelong resident of Syracuse. At the age of 15 Hilda met the love of her life Frank Loguidice while attending... View Obituary & Service Information