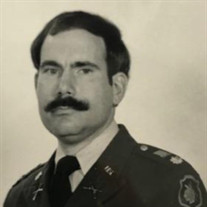 James “Jim” C. Goldstein, Sr., 73, of Liverpool, NY, passed away on Friday, February 19th at St. Joseph’s Hospital in Syracuse, NY. Jim was born in Erie, Pennsylvania on July 12, 1947. He was the only child of Howard and Grace (Gruseck) Goldstein. He attended Academy High School (class of 1965) where he met the love of his life, Marilynn (Bitters) in art class. In 1966, he enrolled at Gannon University where he graduated with a Bachelor’s in Marketing. While at Gannon, Jim joined the United States Army ROTC and earned his commission as a 2nd Lieutenant upon graduation. He married Marilynn on Flag Day, June 14, 1969 and in the fall began his active duty military service at Fort Benning, Georgia as an Infantry Officer. He was later stationed with the “Big Red One” 1st Infantry Division at Fort Riley in Junction City, Kansas until 1971 when honorably discharged from active duty. Soon after his discharge, Jim and Marilynn settled in Liverpool, NY where they raised their family. Jim worked for various insurance agencies through the years as a Claims Adjuster, eventually retiring in 2009 from Gallagher Bassett. He proudly continued his military service in the Army Reserve with the 1st Brigade, 98th Infantry Division until retiring as a Lieutenant Colonel in 2007. Jim was a devoted family man who did his best to never miss a single softball game, Cub Scouts meeting, school concert, impromptu basement recital, or magic show. His favorite part of his day was coming home to his family. Jim was an avid runner who was up every morning at 5 AM for his jog. He had an extensive knowledge of American history, especially military history. No one could beat him at Trivial Pursuit. He was also an active member of Rock Steady Boxing in Liverpool. To know Jim was to love him. His quiet, quick wit will be forever missed. He made sure not a day went by that was not filled with laughter. If the saying from It’s A Wonderful Life is true, that “all you can take with you is that which you have given away,” Jim left this life as one the of richest men, for he gave kindly and greatly to all he knew. He will be missed dearly by his wife of 51 years, Marilynn (Bitters), his son, Jim Jr. (Sally) of Buffalo, his daughter, Marcie Colleen (Jonathan Lopes) of San Diego, and his three granddaughters, Elizabeth, Emily, and Elena, all of Buffalo. Calling hours and a memorial service will be held in the summer. In lieu of flowers, donations can be made to either the Parkinson’s Foundation or the Michael J. Fox Foundation.