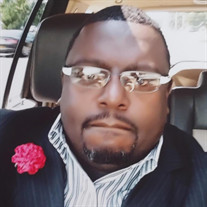 Joe’von L. Works was born on November 12, 1970 in Syracuse, NY to the union of Linda Cross Works and the late Joseph Works. He reached his sunset on Tuesday July 27th, 2021 at his home in Liverpool, NY. Joe’von attended George W. Fowler High School in Syracuse where he excelled as a student-athlete. Upon graduation he worked for over 15 years at the City of Syracuse Department of Parks and Recreation and for several years at Home Headquarters. He simultaneously coached basketball for over 20 years at the Syracuse City School District, and with the Syracuse Select AAU Basketball Program where he developed athletes throughout the Central NY area. Joe’von enjoyed life and doing what he loved. He loved influencing the lives of young athletes. Joe’von accepted Christ at an early age and was a member of Living Water Church of God in Christ where he served as an adjutant. He later joined The Promise Land Church where he served as adjutant to Pastor E. Brian Eure, and was ordained Deacon in September 2017. Joe’von leaves to cherish his memory, his devoted partner, Fronda Booker; his beloved children, Michelle Works (Angela Wilson), Joe’von Works and Joevonna Works (Nikki Harrison) Jacob Works and Malia Works (Michelle Millender); grandchildren, Adore, Ella, and Ty’von; mother, Linda Cross Works (Russell Bell); siblings, Lavonne Pringle, Careff Works (Rashida Chambers), Unique Works (William Brown), Devera Works, and Shamecka Works; and a host of other family and friends. The family of Joe’von L. Works would like to thank the transplant team at University Hospital, where he received exceptional care. The family would also like to thank the Central NY Basketball Community, for their continued support. The family of Joe’von L. Works wishes to acknowledge with deep appreciation, the many comforting messages, floral tributes, prayers, visits and other expressions of kindness and love demonstrated during this time of sorrow.

Joe&#8217;von L. Works was born on November 12, 1970 in Syracuse, NY to the union of Linda Cross Works and the late Joseph Works. He reached his sunset on Tuesday July 27th, 2021 at his home in Liverpool, NY. Joe&#8217;von attended George... View Obituary & Service Information

The family of Joe'von Works created this Life Tributes page to make it easy to share your memories.

Send flowers to the Works family.