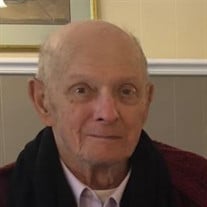 John D. Angiolillo, 93, of Syracuse passed away on April 21, 2022. Born in Syracuse on October 7, 1928, to John and Elisa (Antonelli) Angiolillo. John graduated from Assumption High School in 1947. He also took courses at Syracuse University. John was a US Army Korean War Veteran proud of his service to his country. He retired with General Electric after 33 years as an electronics technician in the Heavy Military Electronics Division, with a strong work ethic that he instilled in his children. He studied music with Wilma Lung at the Smith School of Music. Often, he would play guitar and sing at area nursing homes. He was a member of the Pompeian Players with Father Charles. John was known for his smooth “Perry Como” crooner voice. John was a kind and humble man. His generosity, devotion to God and faith and his family was in everything he did. Above all, he loved his family, big Sunday dinners with desserts, SU sports and baseball, playing cards, seeing friends, and the week-long celebration of his birthdays! And you could take his rules for Pitch as his rules for life- “don’t be afraid to bid” and “rely on your partners.” John was an active parishioner at Holy Trinity Parish for 57 years and more recently at St. Patrick’s on Tipperary Hill. While at Holy Trinity, he was the first Eucharistic Minister, an active choir member and the first (and very best!) Cantor. He started and ran a highly successful Bingo at the school for 15 years. He was also the “on-call” fix-it man and sound technician for the Parish, setting up and caring for the church carillon, he could even program the bells for different occasions. For several years, he was president of the Holy Name Society. (Father Zimmer really liked John!) He volunteered numerous hours to his church and always had time for his family. A life well lived. He will be dearly missed. He is survived by his loving wife of 68 years, Anne (Sherry) and ten children; Patricia (Matthew) O’Brien, Michael (Dorothy), Dave, Mary (Marek Jicha), Mark (Mary Jo), James, Daniel, Kathryn (Darren) Cummings, Stephen (Christine), and John M. (Melanie) and predeceased by his daughter Susan Marie. Grandchildren include Maynard (Victoria) Snyder, Nicholas (Theodore Lyden), Timothy (Rina), Shannon O’Brien, Frank, Klara and Josef Jicha, Maggie and Daniel Cummings, Catherine Angiolillo, Samantha Lindhuber and Michael Angiolillo. Predeceased by his five brothers, and two of his sisters. He is also survived by his sister, Susan DePaola, brother-in-law James (Linda) Sherry, John (Jeri) Sherry and Roger (Denise) Guiney, along with many nieces and nephews. Welcoming family and friends for calling hours on Tuesday, April 26th from 4 to 7 pm at St. Patrick’s Church, 216 N. Lowell Ave with the funeral mass on Wednesday, April 27th at 10 am. Memorial Contributions may be made to All Saints Elementary School, 112 S Wilbur Ave., Syracuse, NY 13204. And another way to honor him, do a good deed for your fellow man and know that John Dominic Angiolillo is smiling upon you as you do. Peace be with you. Farone & Son, Inc. is in care of arrangements. Share condolences at www.faroneandsoninc.com.

Send flowers to the Angiolillo family.