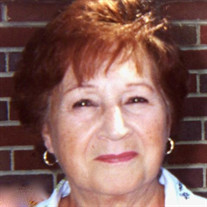 Josephine "Pepsi" Monello, loving daughter, sister, aunt and great aunt, died peacefully after a short illness at St. Joseph's Hospital in Syracuse, N.Y., on Saturday, December 19, 2020, at age 92. Born on November 27, 1928, in Gloucester, Massachusetts, to Maria Curro Nastasi Monello and Frank Monello, she was the fourth sibling of seven sisters and one brother. While she worked for several decades in the restaurant industry at a number of Syracuse area establishments, she was responsible as the primary caregiver to her infirm mother for many years before she died in 1969, a role for which she performed selflessly and for which she was cherished by her family. She was loving and generous and beloved, especially by her many nieces and nephews, and was always open to visiting, to sharing a meal or to talking on the telephone. She was predeceased by her parents, her sisters Louise (Edward) Izzo, Josephine (Edward) Dalton, Concetta (Carl) Piazza and, Frances (in infancy), and her niece Lisa Piazza. She is survived by her siblings Olivia (Nicholas) Lombard, Mary (Carl) Gagliardi and Joseph "Joey" (Valerie) Monello. She is also survived by many nieces and nephews, including: Maureen (Robert) Pingaro, Janice (Robert) McFarland, Jacqueline McDermott, Edward (Cheryl) Dalton, Walter (Kelly) Dalton, Susan (Kevin) Cummings, Nicholas (Hattie) Lombard, Mark (Mary) Lombard, Craig (Janet) Lombard, Carl (Kathie) Gagliardi, Alan Gagliardi, Gary Gagliardi, Ronald Gagliardi, Sheri Monello, Allan Monello, Jackie (Jack) Monello Felton, Karen (Keith) Monello Grymes, and many devoted great-nieces and great-nephews. She was also beloved by her close and very devoted friend of 42 years, Brenda Daddario, and her children Michelle, Stephen, Michael, Gina and Kathy, and her friend and highly regarded caregiver Mike Bianchi. Graveside service will be held in Assumption Cemetery.

The family of Josephine "Pepsi" Monello created this Life Tributes page to make it easy to share your memories.

Send flowers to the Monello family.