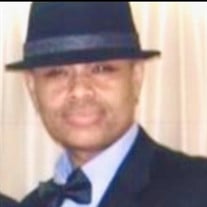 Kevin Scott McCarthy, 57, native of Syracuse, NY, went to be with the Lord on Saturday, December 6, 2020 at Anne Arundel Medical Center in Annapolis, MD. Born in Auburn, NY, he graduated from Corcoran High School and attended Onondaga Community College. He worked at United Parcel Service, where he served 28 years of service as a sorter. Kevin, in his spare time was an avid Pittsburg Steelers fan and enjoyed cooking for family and friends. He will always be remembered as a sincere, good-humored person, whose accepting nature touched those who knew him. Kevin, “Scottie,” will definitely be missed by all. He is preceded in death by his brother, Charles B. Peacock, Jr. Survivors include his wife of 22 years, Melissa A. McCarthy; son, Kevin Scott McCarthy, Jr.; sisters, Anitra C. Peacock, Karla (Dexter) Greene, Twiggy (Erik) Eure, Simone (Lottie) Callender, and Leigha Aziz; brothers, Erick (Mischelle) McCarthy and Donald “Obie” Love; mother, Shirley A. McCarthy; father, Simon Majors; 18 nieces and nephews; 10 great nieces and nephews; and a host of several uncles, aunts, cousins and friends. A calling hour will be held on Monday, December 21st from 11 a.m. to 12 p.m. at FARONE & SON, Inc. Funeral Home. A private service will be held for the family.

Send flowers to the McCarthy family.