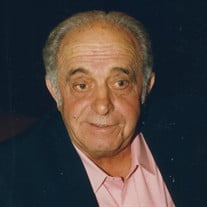 Louis "Len" Leonard Paduana, 94, of Syracuse, passed away peacefully Monday at St. Joseph’s Hospital. A life resident of Syracuse, he retired from Laborers Local 633 and was a member of the International Laborers Union. Len was an avid bowler who competed in local classic leagues and national bowling competitions. In 1965, he was on the Wilson Vanwie Team who ended up winning the Doubles City Tournament. Later on in 1973, Len lead the Twin Tress Team to the ABC National Tournament in Las Vegas with a score of 673. His career was marked by numerous individual awards and league championships such as King of the Hill on Syracuse Bowls and member of the Bowlers 300 Club. A culmination of his achievements gained him the honor of induction into Syracuse Bowling Hall of Fame in 1980. He was a member of IAAC. Len was also an avid golfer and was a member at Brooklawn. He was predeceased by his wife, Rosemary (Reale) Paduana. Survivors include his children, Susan Merluzzi, Leonard (Deb), Teresa, Joseph, David, Mary Ann, and Richard (Debbie) Paduana; sister-in-law, Noreen (Michael) Falcone; grandchildren, Peter and Joseph Merluzzi, Sarah Paduana, Shelby Jo Paduana, Rebecca (Ryan) Benedict, Ryan and Tyler Paduana; great-grandchildren, Olivia, Nicholas, Lucas, and Benjamin Benedict, and Cameron Brown; many nieces, nephews, friends and extended family. The family would like to thank St. Joseph’s Home Health Care, the staff at St. Joseph’s Hospital and Carie Sickles for their compassion and care given to Len. Services will be private. Memorial contributions may be made to the Pancreatic Cancer Action Network at https://secure.pancan.org/site/Donation or the The American Heart Association, P.O. Box 3049, Syracuse, NY 13220.

Louis "Len" Leonard Paduana, 94, of Syracuse, passed away peacefully Monday at St. Joseph&#8217;s Hospital. A life resident of Syracuse, he retired from Laborers Local 633 and was a member of the International Laborers Union. Len was an... View Obituary & Service Information

Send flowers to the Paduana family.