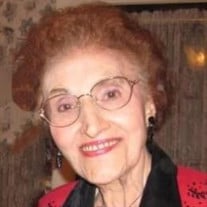 Mattia (Falcone) Kinslow, 101 years “young,” passed away peacefully on 1-7-21 at Syracuse Home, with her devoted sister, Madge, by her side. She was the 7th (of 10) children, and the first daughter, born to Giovanni Falcone and Mary (Andrella) Falcone on 7-12-1919. Self-proclaimed as “the apple of my father’s eye,” she was loved by everyone. She grew up on the North Side of Syracuse, graduating from St. Vincent De Paul High School in 1937. Her singing voice and acting talent were showcased in high school, culminating in a starring role in her Senior Class play, “A Crazy Mix-up,” and she performed as a school vocalist at numerous local events. Her outgoing personality and sense of humor made her very popular with her classmates, many of whom became dear friends for life. Her reflections of high school were captured in “Memories,” a poem which was published in The Vinconian yearbook. In it, she asks, “Shall we meet again, yes, but where?” Mattia continued her education at Powelson Business Institute, followed by a 10+year career as Secretary to the Office Manager of Prudential Insurance. In 1943, she met her husband, James. He worked 3rd shift, and frequented a downtown Syracuse coffee shop each morning after work. He spotted her walking by the coffee shop one day, on her way to work. One morning, Jim worked up the courage to talk to Mattia. Soon after, they started dating, and were planning to be married; however World War II had other ideas for Jim. He proudly served in the U.S. Navy, postponing their wedding until 6-1-1946. Before their marriage, Mattia was diagnosed with a blood condition, was often bed-ridden as a result, and was no longer able to work outside of the home. She “retired” from Prudential in 1952. Mattia and Jim were married at St. Peter’s Church, Syracuse, honeymooned in the Adirondacks, and resided with Mattia’s parents until the “cozy, little nest” that Jim built for his “Sweetheart” was completed. Their “castle” was located in Baldwinsville, where they resided together for 59 years. When her brother, Anthony (Ned) died suddenly in 1961, she and Jim stepped-in and raised Ned’s daughter, Karen. Mattia was unable to have children, but she and Jim were the BEST Aunt and Uncle to so many nieces and nephews. Their door was always open to family and friends, where Mattia kept a spotless home, always ready for entertaining. She was a gracious hostess and a fabulous cook. She perfected the art of preparing game meat, fish, and fowl like a gourmet chef, as Jim was a skillful hunter and fisherman, who looked forward to changing seasons in the great outdoors. In the summertime, Mattia enjoyed memorable times with the entire Kinslow Clan at the family cottage of Jim’s brother, Joe Kinslow, in Henderson Harbor; Mattia also treasured times with the entire Falcone Clan at the family cottage of her brother, Rosario Falcone, on Otisco Lake. She was a loving, compassionate caregiver to friends and family in times of need, some of whom spent lengthy periods of illness, recuperating in her home. In her spare time, Mattia was an avid bowler and card player. In the early 1980’s, Mattia met two sisters (Peggy Rochon and Cathy Kissel) at a bowling league sign-up in Liverpool. They teamed up, and became fast friends for life. She was their “Mother Tia” and they were her “adopted daughters.” She excelled at pinochle, and looked forward to regularly scheduled “card nights” with her dear friends for many years. Mattia was a devout Catholic, and lifelong communicant of St. Peter’s Church, where her younger sister, Mary, worked in the Rectory for many years. Her faith was ever present in her thoughts, words, and actions. She was a volunteer at St. Joseph’s Hospital for 30 years, and at Loretto for many years. At the age of 86 years young, Mattia “downsized” to an apartment at The Hearth on James, where she resided for 10 years. She welcomed new residents and familiarized them with resident activities, such as outings to the casinos, weekly bingo, craft shows, live entertainment and “happy hours.” Mattia also served as President of the Resident Association, and won several WII Bowling championship trophies at the Hearth. Mattia aged gracefully, tall and stately, with an impeccable flair for fashion, perfectly coiffed hair, and matching accessories from head to toe. Lipstick was the “finishing touch” to complete her beautiful look on any given day. Mattia, and her sister, Madge, joined the Syracuse Home community at McHarrie Place in 2016. They were roommates, social butterflies, and participated in all activities on a daily basis. They thrived in this setting, and found comfort in living together, Mattia still acting like the big sister, looking after her younger sister. They were a dynamic duo, recognized by all, and affectionately referred to as “the sisters.” They competed, and won First Place honors, three successive years for their Resident Halloween costumes. They were very close throughout their lives. At 101, Mattia was proud to be the longest living Falcone Family member ever. She was predeceased by her husband, James F. Kinslow; her parents, Giovanni and Mary; sister, Mary Angela Falcone; brothers, Joe (Evelyn), Larry (Grace), Sam (Irene), Dom (Tess), Rosario (Marie), Anthony (Ned), and John (Alice) Falcone; brother-in-law, Ernest Maffei; nephews, Gerald and Mark Falcone. She is survived by her sister, Magdalene Maffei and Magdalene’s children, Ernie (Nancy) Maffei, Donna (Frank) D’Eredita, Darla and Debra Maffei; niece, Karen (Sam) Tassone; nephew, Neil Falcone; Godchild, Robin (Ed) Kinslow-Evans; and many beloved nieces, nephews, friends and extended family. Mattia and her family are eternally grateful to the staff and volunteers at Syracuse Home for the excellent, compassionate care and kindness that they exemplify. Due to COVID restrictions, there will be no calling hours. Funeral services will be private. Donations in Mattia’s memory may be made to Syracuse Home Association (Resident Activities Program), 7740 Meigs Road, Baldwinsville, N.Y. 13027.

The family of Mattia (Falcone) Kinslow created this Life Tributes page to make it easy to share your memories.

Send flowers to the Kinslow family.