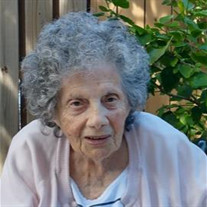 Nancy Virginia Orlandella of Melbourne, Florida – formerly of Syracuse, New York – passed away on Monday, April 19, 2021, at the age of 97. Nancy was born to parents Gaetano and Maria Cappotto on February 14, 1924 in Revere, Massachusetts. The oldest daughter and one of eight children, when Maria died suddenly, Nancy had no choice but to leave school after 8th grade and raise her six brothers and younger sister Josie. Nancy never regretted this choice, and lovingly made a home for her siblings while grieving the loss of her mother. As a young woman, Nancy met and fell in love with Michael Orlandella, and faithfully waited for him while he served in the Army during World War II. After the war, Mike and Nancy resumed their courtship and on January 25, 1948, they were married at St. Michael’s Church in Revere. This was the beginning of their 73 year marriage that lasted until Mike’s passing on New Years’ Eve in 2020. After marriage, Mike and Nancy started their journey by moving to Syracuse, New York where they made their first home together. During their first 10 years in Syracuse, Mike and Nancy welcomed sons Michael, Leonard (Lenny) and Ralph. After Ralph’s birth, Mike was transferred to San Diego where shortly after arriving, baby daughter Anita (Nida) was born in the back seat of a Cadillac – a story Nancy loved to tell over and over. San Diego was followed by a brief stint in Omaha, Nebraska, and finally a move back to the Syracuse area where they settled at 128 Cranberry Drive in Liverpool to continue raising their family. Nancy was a wonderful homemaker and fiercely loved her children, teaching them about caring for all creatures great and small. Some of her children’s earliest memories were their mother saving and raising baby birds and bunnies, and Nancy had a natural gift for nurturing. That gift extended to flowers as well, and her rose garden was a special passion. She loved walking in her neighborhood and visiting with her good friends on Cranberry Drive. When grandchildren began to arrive, Nancy was thrilled and was a natural “Grandma”, loving involvement in their lives. Although a tiny woman by stature, Nancy was a force to be reckoned with and her children never wanted to let her down. A true Italian matriarch, Nancy loved to preside over family gatherings, and was truly revered by her family. In her later years in life, Nancy faced many health issues, but took them in stride and persevered. Mike was devoted and wanted nothing more than to be at her side giving her additional strength. In their last decade together, you rarely saw one without the other. Nancy is survived by her children Michael (Nancy) Orlandella, Lenny (Joyce) Orlandella, Ralph (Angela) Orlandella, Anita (Rick) Dodge, 10 grandchildren, and 15 great-grandchildren. Nancy is predeceased by her husband Mike, her parents Gaetano and Maria, her brothers Sal, Mario, Richard, Alfred, Robert and Frank, sister Josie, and beloved niece Florence Anketell. No service is planned at this time; a memorial will be scheduled at a later date.

Nancy Virginia Orlandella of Melbourne, Florida &#8211; formerly of Syracuse, New York &#8211; passed away on Monday, April 19, 2021, at the age of 97. Nancy was born to parents Gaetano and Maria Cappotto on February 14, 1924 in Revere, Massachusetts.... View Obituary & Service Information

The family of Nancy Virginia Orlandella created this Life Tributes page to make it easy to share your memories.

Send flowers to the Orlandella family.