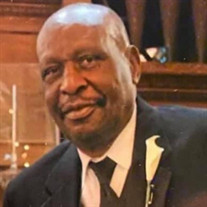 Nathaniel “Nate Dogg” Holloway, 73, of Syracuse, was called home on Monday, January 25, 2021 at Upstate Medical Center. He was the fifth of 10 siblings who died from complications that resulted from diabetes and kidney disease. Nate was born and raised in Belle Glade, Florida where he graduated valedictorian from his high school class. At the early age of 17, he enlisted in the United States Air Force where he served for 26 years, retiring in 1990 as Tech Master Sergeant. While in service, he served in the Vietnam War and many other countries. After retiring from the Air Force, Nate moved to Syracuse to join the rest of his family and then started his own business, Holloway Auto Sales. He also earned a degree from Onondaga Community College (OCC). Nate was one of the pillars of the community who spent most of his days lending a helping hand to his family and anyone else who needed his help. He never met a stranger, and everyone was treated as family to him. He was predeceased by his parents, Leroy Holloway, Sr. and Geraldine; brothers, Leroy, Napolean, Lemar, James, and Albert James Holloway; sisters, Annie Holloway-Robinson, Lena and Leaza Holloway; and grandson, Zachary Holloway, Jr. He is survived by his wife of 47 years, Diann Holloway; sons, Louis and Zachary of Syracuse, and Nathaniel Jr. and Dayo of Fort Worth, TX; his daughters, Felicia Holloway of Fort Worth, TX and La-Shante’ Holloway-Adoukonou (Yao) of Rochester, MN; his sister, Deborah Holloway-Egbuna (Gregory) of Syracuse, NY; sixteen grandchildren; six great-grandchildren, a special great nephew, Ikeem Thomas, and a host of nieces, nephews, cousins and special friends. Calling hours will be held from 10 a.m. to 12 p.m. with a funeral service to follow on Saturday, February 6th at FARONE & SON, Inc. Funeral Home, 1500 Park Street.

Nathaniel &#8220;Nate Dogg&#8221; Holloway, 73, of Syracuse, was called home on Monday, January 25, 2021 at Upstate Medical Center. He was the fifth of 10 siblings who died from complications that resulted from diabetes and kidney disease. Nate... View Obituary & Service Information

Nathaniel “Nate Dogg” Holloway, 73, of Syracuse, was called home
on...

Send flowers to the Holloway family.