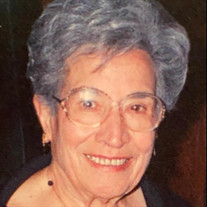 Olga Caruso Vinciquerra “Nana,” of Syracuse, New York, passed away on February 2, 2022. Born in Calabria, Italy to Anthony and Josephine Caruso, Olga immigrated to the United States at the age of two. A lifelong resident of Syracuse, Olga attended Central High School. Upon graduation she was employed by the United States Department of War as a stenographer. Through the years, she held a variety of positions including working as a cosmetician at Chappell’s Department Store, a claims adjuster at Excelsior Insurance, and a library clerk for the Onondaga County Public Library System. Olga was married to the love of her life, Anthony J. Vinciquerra, for 42 years until his passing in 1990. She was an avid reader, a phenomenal cook, and was viewed by many as the matriarch of the family. Her greatest joy was sharing home cooked Italian meals and she was happiest when surrounded by her family. As a proud mother and grandmother, Olga never missed an opportunity to celebrate their accomplishments. In addition to her husband, Olga was predeceased by her daughter Jacalyn Vinciquerra Stewart, sisters Esther Spadaro and Glorya Pascarella, and son-in law James Wescott. She is survived by her sons Dr. Anthony J. Vinciquerra and Mark (Michele) Vinciquerra; grandchildren A. Joseph (Elizabeth) Vinciquerra, Dr. Glenn Stewart (fiancé Dr. Aneesa Thannickal), Elizabeth Vinciquerra and Rebecca Vinciquerra; great- grandchildren Jonas and Luca Vinciquerra; and several nieces and nephews. Calling hours will be held on Monday, February 7th from 4:00p.m. – 6:00p.m. at FARONE & SON Inc Funeral Home, 1500 Park St, Syracuse. Funeral services will be conducted Tuesday, February 8th, 9:15am at the funeral home and 10:00am at Our Lady of Pompeii/St. Peter’s Church where a mass of Christian burial will be celebrated. Burial will follow in Woodlawn Cemetery. In lieu of flowers, please make a donation to a charity of your choice.

Olga Caruso Vinciquerra &#8220;Nana,&#8221; of Syracuse, New York, passed away on February 2, 2022. Born in Calabria, Italy to Anthony and Josephine Caruso, Olga immigrated to the United States at the age of two. A lifelong resident of Syracuse,... View Obituary & Service Information

The family of Olga Caruso Vinciquerra created this Life Tributes page to make it easy to share your memories.

Send flowers to the Vinciquerra family.