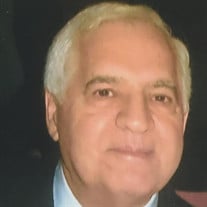 Onofrio “Ono” Moro, son of Nicholas and Antonia Moro of Syracuse, passed away surrounded by family on November 27, 2020, at the age of 87. He was a longtime communicant of St Daniel’s Church. Ono’s competitive spirit and big heart built a close-knit family and inspired the love of his favorite sport, bowling, with all who came in contact with him. Family and bowling were intertwined. At an early age, he started as a “Foul Line Attendant” at Bowl Mor Lanes on North Salina Street, eventually becoming a “Pin Boy.” After graduating from North High School, he entered the army and served in the Korean War. Upon returning home he became Bowl Mor’s “Lane Man” and met his love and dancing partner, Mary Grasso. A loyal husband and father of four, family was a priority. Ono was able to fulfill his bowling passion, competing in local classic leagues, national, and even international bowling competitions. His career was marked by numerous individual awards and league championships, especially as a team member of Santaro Trucking. A culmination of his achievements gained him the honor of induction into Syracuse Bowling Hall of Fame in 2007. But his proudest moments were with family. He delighted in sharing the game with his children and grandchildren. The pinnacle of this connection was realized in his later years when he teamed with his sons and grandsons to win several league championships. The dedication to his sport and love of mentoring bowlers of all skill levels spanned his time at Bowl Mor, 20+ years at Lakeview Recreation in Liverpool and another 30+ years at Bowling Green Lanes in North Syracuse until his retirement at the age of 83. His easy-going personality, generosity, and big heart left a lasting impression on everyone who knew him. His legacy will not be forgotten. He will be greatly missed. In addition to his parents, he is predeceased by brothers, Roy, Joseph, Chester and Peter. He is survived by his wife of 63 years, Mary; his sons, Nicholas (Roberta Korthas) and Michael; his daughters, Rona (Tom Lasnicki) and Lisa of San Francisco; his grandchildren, Nicholas, Gregory, Jennifer (Matthew Eaton), Alicia, Robert and great grandson, Jack; along with several sisters-in-law, nieces and nephews. Ono’s Family would like to thank the Doctors and Caregivers at the Syracuse VA Medical Center for their compassionate care and support. Private services will be held for the family. To attend the services remotely, visit Onofrio’s tribute page on the funeral home’s website www.faroneandsoninc.com at 9:30am on Thursday December 3rd. In lieu of flowers, contributions may be made to St Daniel’s Church 3004 Court St, Syracuse NY 13208 or St Jude Children’s Research Hospital 501 St Jude Place, Memphis TN 38105.

Send flowers to the Moro family.