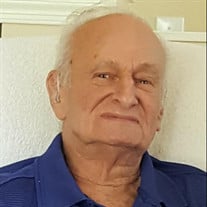 Paul J. Berube, 95, formerly of Syracuse, NY, passed away peacefully on Sunday, April 18, 2021 at St. Joseph’s Hospital-Hospice in Tampa, Florida. Paul retired from Alling & Cory after many years of employment with the company. After retiring, Paul spent several years in Syracuse before moving to Florida to be with his children and grandchildren. He was a member of the American Legion Tipperary Hill Post 1361 and the East Syracuse Post 359. Paul was a WWII Veteran of the US Army as well as the Royal Canadian Air Force, one of his proudest achievements. He was preceded in death by his wife, Martha (Gatto) Berube, in 1983; sisters, Madeline York, Rolanda Hewitt, Eve Gombash, Jeannette George, Jeanine Sibble; brothers, Ray, Jerry, Henry, Roger, and Richard. Left to cherish his memories are his daughters, Carol Anne (John) Gandia of Tampa, Florida, and Anne Marie (Tom) Hayden of Rogersville, Tennessee; grandchildren, Christina (Drew) Kaiser and Nicholas (Maryouri) Gandia both of Tampa, Florida; sister Lucille Tamaro of California and brother, Maurice Berube of Florida; numerous nieces and nephews that he held dear to his heart, as well as his special canine companions, Peanut and Benny. Funeral services will be held on Saturday, May 1st, 9:30 a.m. at Farone & Son Funeral Home and 10 a.m. at St. John the Baptist Church where a Mass of Christian Burial will be celebrated. Burial will follow in Assumption Cemetery. Calling hours will be held on Friday, April 30th, from 4 p.m. to 7 p.m. at the funeral home, 1500 Park Street, Syracuse. A special thank you to St. Joseph’s Hospital Seasons Hospice Staff in Tampa for their care and compassion. Because of his love of animals, in lieu of flowers, contributions may be made to Helping Hounds Dog Rescue at helpinghoundsdogrescue.org or mail to Helping Hounds Dog Rescue, 7268 Caswell Street North Syracuse, NY 13212.

Paul J. Berube, 95, formerly of Syracuse, NY, passed away peacefully on Sunday, April 18, 2021 at St. Joseph&#8217;s Hospital-Hospice in Tampa, Florida. Paul retired from Alling & Cory after many years of employment with the company. After... View Obituary & Service Information

The family of Paul J. Berube created this Life Tributes page to make it easy to share your memories.

Send flowers to the Berube family.