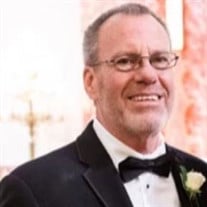 Richard “Rick” A. Kline, 58, of Syracuse passed away on Tuesday. A graduate of Henninger High School, Rick was on the school’s lacrosse team and contributed to the 1980 championship. He then attended and graduated from SUNY Cortland. Rick has worked for Catholic Charities for the past 35 years where he made a substantial impact on the community. He was a lifelong Boston Red Sox fan, but his true passion in life was being with his family. Rick is predeceased by his father, Robert Kline, Sr. Survivors include his loving wife of 34 years, Jennifer; children, Jessica (Christopher) DeStefano with a grandson on the way, Richard Kline, and Alexander Kline; mother, Dorothy Kline; siblings, Robert (Cathy) Kline, Jr. and David (Michelle) Kline; niece, Nicole (Daniel) Romeo; nephew, Matthew (Sarah) Kline; great-niece, Francesca Romeo; and aunt, Marge. Calling hours will be held on Monday, September 6th from 3 p.m. to 7 p.m. at FARONE & SON, Inc. Funeral Home, 1500 Park Street. A funeral service will take place on Tuesday, September 7th at 10:15 a.m. at the funeral home followed by at Mass of Christian Burial at 11 a.m. at St. Vincent DePaul Church, 342 Vine Street, Syracuse. Burial will follow in Assumption Cemetery. Contributions may be made to Catholic Charities.

Richard &#8220;Rick&#8221; A. Kline, 58, of Syracuse passed away on Tuesday. A graduate of Henninger High School, Rick was on the school&#8217;s lacrosse team and contributed to the 1980 championship. He then attended and graduated from SUNY... View Obituary & Service Information

The family of Richard "Rick" A. Kline created this Life Tributes page to make it easy to share your memories.

Send flowers to the Kline family.