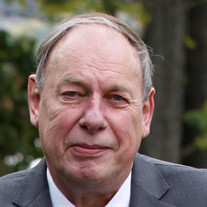 Robert P. “Fes” Fiesinger, 73, of North Syracuse, passed away Tuesday at St. Joseph’s Hospital. A resident of Syracuse, Robert started his life’s adventure in 1967 after graduating from Syracuse Central Technical High School. Faced with a low draft number, but high vertical jump, Fes as he would later be known, chose to enlist in the US Air Force where he joined the 3345th Air Base Group at Chanute Air Force Base in Rantoul, IL. At a competitively advantaged 6’7”, Fes would soon head up the Athletic Dept for duties performed under service. He played basketball and volleyball for Chanute Rockets, and in the winter months, was a goalie for a semi-pro hockey team. He also gave a go at team trials for the ’72 Winter Olympics in bobsledding. An honorably discharged Sergeant in 1972, Fes went back home to Syracuse to work for the Carrier Corporation. The following decade Fes traveled the globe living in Saudi Arabia, London, England and spending time in almost all 50 states as a Liaison for Carrier. He would retire a quick 33 years later as the Director of International Relations for Carrier Global and would later say “there wasn’t a day that went by that I didn’t love what I did and the people I worked with. I was lucky.” In the mid 80’s, Fes became involved with the Make-A-Wish Foundation, and later would become CNY Chapter president and Chairman of Special Fundraising Events. An avid golfer, Fes founded the annual MAW Open Golf Tournament and Short Fat Guys Road Run, which collectively raised over a quarter million dollars for MAW during his years of involvement. In his free time, Fes enjoyed spending weekends at his family’s farm in the Catskill Mountains trout fishing and horseback riding, a common bond both him and his late wife Vicki shared (not the fishing part). He loved coaching his only child, Scott, in Little League and being a supportive father, listener, and ever-encouraging champion figure for all of Scott’s endeavors and dreams throughout the years. Most recently, Fes found absolute joy in becoming a grandfather to Owen and Weston and of course a father-in-law to Jess. A friend to many, he always enjoyed a good laugh and a cocktail with the boys ‘Up the Road”. There is no doubt, he will be missed. He was predeceased by his loving wife, Victoria “Vicki” Fiesinger in 2012; and brothers, Eddie and Charles Fiesinger. Survivors include his son, Scott Fiesinger (Jess Stage-Fiesinger) and grandsons, Owen and Weston Fiesinger of Rochester; brothers, Don (Janet) Fiesinger and Richard (Jean) Fiesinger; sisters, Lois-Ann Berry, Emma-Jane Fiesinger, and Laura Fiesinger; several nieces and nephews. Private services were held due to Covid-19, however a celebration of life will be planned in the months to come once we can safely celebrate and enjoy together (as he would want it!). We encourage you to email us at [email protected] to be added to a notification and distribution list for details on that event to come. Memorial contributions may be made to Make-A-Wish Foundation at http://cny.wish.org. FARONE & SON Inc Funeral Home is in care of arrangements. Share condolences at www.faroneandsoninc.com

The family of Robert "Fes" P. Fiesinger created this Life Tributes page to make it easy to share your memories.

Send flowers to the Fiesinger family.