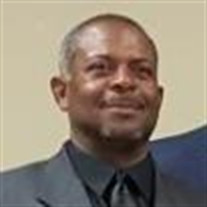 Ronald Q. Smith, 60, of Syracuse, NY passed away on Friday, April 22, 2022. Ronald was born on October 27, 1961, in Portsmouth, Virginia, to Kermitt P. Smith Sr. and Bessie Person. Ronald and his entire family migrated to Syracuse, NY where he attended Syracuse City Schools before joining the United States Army in 1980. Ronald received an Associate’s Degree in Divinity. He last worked as a Cook at the Marriott Hotel in downtown Syracuse. He accepted Christ as his Lord and Savior at Community Temple COGIC. Ronald was extremely gifted with his hands and in his free time would do odd jobs laying tile, installing cabinetry and whatever his hands found to do. He was a lover of Sports and had a mean "jump shot". In addition to his Father Kermitt P. Smith Sr., Ronald was preceded in death by his loving grandparents, James Smith Sr. and Louella (Campbell) Smith and his niece Timara ( Queisha) Orr. Ronald is survived by his mother, Bessie Person; children, Raheen (Danielle) Huggins, Hassan Smith, both of Syracuse, NY, Celestia (Brewington) Reid of Chester, VA, Antoine Smith of Norfolk, VA, Tasha Smith of Syracuse, NY Aaron and Amber Smith both of Tuscaloosa, AL and Rosalyn Johnson of Detroit, MI. His brother Alonso (Deborah) Person, His sister Valerie Orr, both of Syracuse, NY his Brother Kermitt Smith Jr. of Schenectady, NY along with upwards of 30 grandchildren, a host of nieces, nephews, aunts and uncles, cousins and friends. He also leaves to cherish his memory his beloved ex-wife Dieann Hollis of Tuscaloosa, AL whom he always affectionately stated that he was going to win back. A Visitation will be held for Ronald on Tuesday, May 3, 2022 from 10:00 am - 11:00 am followed by a Funeral Service at 11:00 am at Farone & Son, Inc. Funeral Home.

Send flowers to the Smith family.