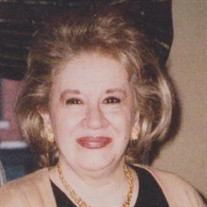 Rosita (Samora) Simiele, 79, a life-long resident of Syracuse passed away on December 28, 2020 at Crouse Hospital from complications of a stroke. Rosita became very involved in her children’s elementary school, Our Lady of Pompei, assisting in the development of the school library. She worked tirelessly with a team of volunteers and the Franciscan community to raise funds to support the purchase of books, furniture and other library materials. She was the creative and driving force behind numerous fund raising events for the school such as the OLP Fashion Show and OLP Card Parties. Her Fashion Shows even “hit the road” performing at the NYS Fairgrounds Italian Festivals in the 1970’s. She volunteered several days in the library reading to students and assisting with administrative duties. Along with her family, she continued to raise funds for the school library in her son Frank’s memory. She later found work as the promotions and marketing director for the McDonald’s corporation at the Plaza 81 store. She created the “Adopt A Lot” program for inner city community use. She founded a plus size store in Plaza 81 called “fuller figure fashions” and was one of the first people to use Centro buses for inside and outside advertising signage. Upon closure of that store, she opened “Jeans Ranch” which was a denim and designer sweater store also at Plaza 81. Her real love and true calling was when she found employment in the jewelry industry where she was able to showcase her flair for style. Her name became associated with the jewelry business and she became the Operations Manager & Buyer for more than 25 years with Henry Wilson Jewelers. She traveled to Las Vegas and New York City for jewelry shows and really thrived in this business. She received the Crystal Peacock Award for Outstanding Marketing and if you knew Rosita her flair for window dressings were unmatched. Her style, creativity and ability were most definitely noticed in her store window displays. She held events like “Men’s Night” which had a secondary purpose to raise proceeds for the Syracuse Area Rescue Missions’ Homeless Program. She had a soft spot for the homeless and believed that “People needed People.” She instilled this in her family and was also instrumental in her daughter Annette’s programs of supporting local food banks. She would always say that we had no idea what it was like to go to bed hungry. She was kind, compassionate and unselfish. On many occasions while in NY she would witness young people panhandling and she would buy them lunch at some of NY’s finest establishments and encourage them to return home. She never really looked for acknowledgment to these things but did so with quiet grace and dignity. Rosita was a life-long communicant of St. Peter’s Church, now Our Lady of Pompei/St. Peter’s. She loved to attend Mass at Pompei and reacquaint herself with many dear old Pompei friends from “Mother’s Club.” Rosita is predeceased by her husband, Anthony “Sonny” Simiele; her son, Frank Victor Simiele; her parents, Victor Samora Sr. and Jennie Visciglio Samora; and her brother Victor Samora Jr. She is survived by her most loving daughter who cherished her relationship with her mother, Annette Simiele of Syracuse and her former daughter in law, Lisa Simiele Monello of Dallas, Texas as well as many close nieces, nephews, cousins and loving friends and care-givers. She will be deeply missed by all those who knew her and especially her daughter Annette who cared for her at home for many years. Rosita and Annette loved their trips to Niagara Falls and to the Our Lady of Fatima Shrine in Lewiston, NY. One summer they went 9 times and they treasured these trips together. The relationship between mother and daughter was indeed very special and forever enduring. A Mass of Christian Burial will take at Our Lady of Pompei/St. Peter’s Church, 301 Ash Street, Syracuse 13208 on Wednesday, January 6th at 11 a.m. with burial to follow at Assumption Cemetery. To attend the services remotely, please use the link on Rosita’s tribute page at www.faroneandsoninc.com to watch the live webcast at 11 a.m.

Rosita (Samora) Simiele, 79, a life-long resident of Syracuse passed away on December 28, 2020 at Crouse Hospital from complications of a stroke. Rosita became very involved in her children&#8217;s elementary school, Our Lady of Pompei, assisting... View Obituary & Service Information