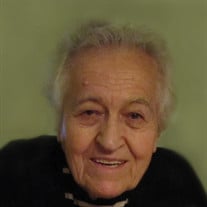 Stefanka “Stef” Stoikofski, 88, of Gainesville, FL passed away on February 22, 2021. Stefanka was born in Velusina, Macedonia on July 28, 1932 to Marko and Guveza Dimovski. She immigrated to the United States and settled in Syracuse, New York in 1961. It was there that she met and married her husband, Risto Stoikofski. They had one child, a daughter, Mary. Stefanka began working as a seamstress at Edwards department store. After that she worked at Will and Baumer candle factory, and GE. She then went on to work for Chrysler at the New Venture Gear division, where she did not miss a single day of work for 27 years. She was one of the first communicants of St. George Macedonian Church in Syracuse. After her retirement in 1998, Stef moved to Gainesville, Florida to be with her daughter, son in-law, and first born grandson. It was there that Stef began to enjoy her passions which included gardening, crocheting, baking, and cooking. Stef loved to garden and tend to her roses, amaryllis, and day lilies. She enjoyed going to the nursery to look for unique flowers. It was her goal to always have the nicest yard in the neighborhood. Stef had an incredible talent for crocheting and could make gorgeous creations without even using a pattern. She made beautiful blankets and sweaters for her future great grandchildren. When it came to baking and cooking, Stef was always on the look-out for the “best ever” recipe on the Food Network. Feeding her friends and family was one of the biggest joys in her life. After many of her fabulous meals she would encourage everyone to “getta more!” Stef’s greatest love was helping raise her two grandsons. She was an integral part of their lives, attended every school event, and tried to make it to every soccer game that the boys played in locally. Stefanka was preceded in death by her husband, Risto. She is survived by her daughter, Mary (Chris) Koenig; grandsons, Nicholas and Justin Koenig; brothers, George (Sonja) Dimovski and Peter (Paca) Dimovski. Calling hours will be held on Friday, March 5 at St. George Macedonian Church, 5083 Onondaga Rd. from 10:00 a.m. to 11:00 a.m. A private funeral service and burial will be held for her family. In lieu of flowers, contributions can be made to St. George Macedonian Church. Services entrusted to FARONE & SON, Inc. Funeral Home.

Stefanka &#8220;Stef&#8221; Stoikofski, 88, of Gainesville, FL passed away on February 22, 2021. Stefanka was born in Velusina, Macedonia on July 28, 1932 to Marko and Guveza Dimovski. She immigrated to the United States and settled in Syracuse,... View Obituary & Service Information

The family of Stefanka "Stef" Stoikofski created this Life Tributes page to make it easy to share your memories.

Send flowers to the Stoikofski family.