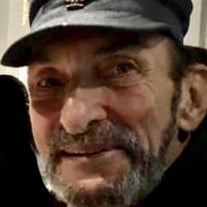 Vincent J. Renda, of Watertown, NY, passed away Aug. 18, 2021, at the VA Medical Center in Syracuse, NY. Born on November 2, 1946 in Elizabeth, NJ, son of Emanual and Mary(Demarco) Renda. He entered the US Navy on December 7, 1965. He was honorably discharged as a Seaman 2nd Class. After the Navy, Vincent returned to Elizabeth, NJ where he worked for the Laborers Union Hall, before moving to the North Country in 1990 where he then worked on Fort Drum as a Bio Environmental Engineer. After retirement he started his own business and was the owner and operator of Green Abatement World Technologies for Ecology. Vincent was a devoted family man, who raised his four children as a single father. He enjoyed spending time with his children, grandchildren, great-grandchildren, and playing with his dog Tut. Regardless of the time of day, he would greet everyone with an "Aye Good Morning" and he was rarely seen without his denim "train conductor" hat. He was also very particular about his food and enjoyed his Hershey bars cold, his coke cola almost frozen, his broccoli burnt, and his steak still mooing. Among his survivors are his daughter, Heather (Travis) Renda-Amyot; sons, Vincent Renda, Jason (Kristy) Renda, and Christopher Renda; their mother, Deborah Renda; his sister, Josephine "Jay" Lepore and his brother, Santo (Zina) Renda. A second marriage resulted in five bonus children. Two of which he remained close with after the marriage ended, as they were like sons to him, Billy (Angel) Maass and Eric Maass. He is also survived by his nine grandchildren, Anthony (April) Renda, Samantha (Logan) Smith, Teona Renda, Ciara Renda, Madelyn (Mitchell) Renda-Bursey, Connor Renda, Isabella Renda, Veronica Renda and Cooper Renda, as well as, several bonus grandchildren. He also has five great grand-children, several nieces and nephews, and his beloved dog, Tut. As he wished, there will be no funeral service. Farone & Son Inc. Funeral Home has arrangements. A celebration of life will be held at the convenience of his family.

The family of Vincent J. Renda created this Life Tributes page to make it easy to share your memories.

Send flowers to the Renda family.