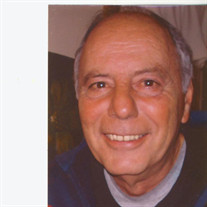 William “Billy” Crupi, 80, of Liverpool, passed away at his home on January 30, 2022. Born in Syracuse, he was the son of the late Sarah (D’Agostino) and Anthony Crupi. Billy put in 40 years at Bristol Laboratories, although for some time his children were under the impression that he was a secret agent. He was a member of the Italian American Athletic Club. A scratch golfer, Billy’s hobbies included pretending to dislike Yogi and lamenting the Yankees’ inability to advance runners in scoring position. Billy is survived by his wife, Linda Crupi; his two children, Lisa (Will) Mayers of Cicero and Anthony Crupi of Brooklyn; four grandchildren, John Mayers of Denver, Nicholas (Jane) Mayers of Syracuse; Joe Mayers of Cicero and Diana Mayers of Bridgeport; brother, Robert (Jackie) Crupi; great-grandson, Gianni, of Bridgeport, as well as several aunts, uncles, nieces, nephews and cousins. A funeral Mass in celebration of Billy’s life will be held at 10 a.m. on February 2nd, at Sacred Heart Church in Cicero. Interment will follow later this spring in Assumption Cemetery. Family and friends are invited to attend a calling hour from 9 to 9:45 a.m. at Sacred Heart, 8229 Brewerton Rd. In lieu of flowers, contributions may be made to the Hospice of CNY, 990 7th North St., Liverpool, NY 13088.

The family of William "Billy" Crupi created this Life Tributes page to make it easy to share your memories.

William “Billy” Crupi, 80, of Liverpool, passed away at his home...

Send flowers to the Crupi family.